The advanced neurological testing procedures listed below allow us to pinpoint brain impairments that may be responsible for your vertigo or balance disorder. 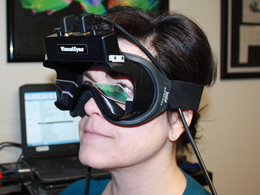 VNG is a computerized system used in the assessment of the oculomotor system (nervous system control of eye movement) and the function of those areas of your brain controlling these movements.

The VNG test is comfortably performed in our office. We simply place special goggles with an infrared camera on your child or teenager’s head to record and measure their eye movements in both light and dark conditions.

Many sufferers of vertigo may have had the VNG test performed at their EENT office. The version of VNG analysis an EENT performs is typically done to rule out inner ear disease. This test usually includes caloric testing that blows hot and cold air or water into the ear to try to re-create the vertigo. This test can be pretty uncomfortable. We do not typically perform that aspect of the VNG testing because we as functional neurologist are focused on analysing brain malfunction that may be causing a patient’s vertigo or poor balance

Specific areas and pathways of the brain are activated during different types of eye movements. During the test computer software is recording and graphing your precise eye movements as you follow the visual target with your eyes. By measuring your recorded eye movements and displaying them on the computer screen you can see your own eye movements and how they compare to normal measurements.


The following eye movements are measured by VNG:

The VNG eye movement tracings provide invaluable neurologic information concerning specific areas of your brain. We are experts at analysing these specific eye movements and determining if they have been disrupted in their proper function. We correlate the VNG findings with our other testing and examination procedures to develop a specific therapeutic program for each individual. 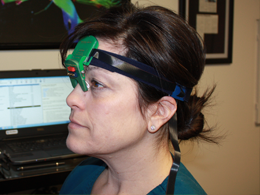 We measure your saccades using saccadometry. Saccades are quick movements of your eyes that allow you to voluntarily move your eyes quickly from one object to another or to react by moving your eyes to a suddenly appearing target reflexively. Saccades can be measured using a device called a saccadometer. The saccadometer is strapped around a patient’s head using an elastic headband. Within the unit, there is a laser that projects targets onto the wall that a patient will look at quickly or saccade to. The saccadometer will measure the eye movements at the same time.

Studies have shown this test to be a very accurate way to detect brain dysfunction caused by injury or neurological disorders. This test cannot be altered voluntarily by the patient because you cannot consciously control the speed of your eye movement during each saccade; your eyes move as fast as they can. The purpose of your saccadic eye movement is to aim the part of your eye with the best vision (fovea) at the thing you want to see most, and then hold your eye there as you examine it.

Saccades are the only human physiological function that uses every area of the brain. It is for this reason that we can evaluate a person’s saccades to determine what areas of the brain are not functioning at par.

An area of your brain known as the superior colliculus creates an environmental grid that allows you to know where your body is in space. When you move your eyes quickly using a saccade, your brain computes an exact position of the target within that grid for your eyes to saccade to. Neurological disorders and brain injuries can affect areas of the brain that form this grid. If the grid is faulty, the saccadic mechanism will be off and this can be measured using saccadometry. 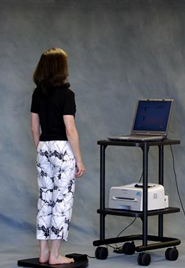 Statistics show that falls are the leading cause of death from injury among people aged 65 and older. Optimal Balance is essential to prevent a devastating fall.

We use Computerized Assessment of Postural Stability (CAPS™) testing performed in our office for assessing balance and how well your brain perceives your body position in space.

When a person has vertigo or poor balance almost always their perception of where their body is positioned in space is disturbed. Important areas of the brain react to information that they receive from the nervous system’s sensors or receptors in the body. The brain uses this information to create a somotopic or body map that allows us to have good balance and function as we move through our environment. Damage or dysfunction to these important areas of the brain can cause a person to have an altered sense of where they are in space. These deficits can be devastating to a senior’s ability to walk and can cause a sense of disequilibrium.

The CAPS balance and posture stability test uses an extremely sensitive force platform and specially designed software that can measure the otherwise imperceptible and undetectable changes in a person’s balance or what is known as their center of pressure and limits of stability. A person’s center of pressure is closely related to a person’s center of gravity and a person’s limit of stability is how far they can move off of this center without falling. The CAPS will generate a report that quantifies a person’s balance and stability. This will provide an objective score that can be compared to normative data for the patient’s age, height, gender or prior CAPS baseline. This test is essential in diagnosing the cause of a person’s vertigo or balance disorder and can be used to monitor progress through care. For more information go to: https://www.vestibtech.com/TBI.html 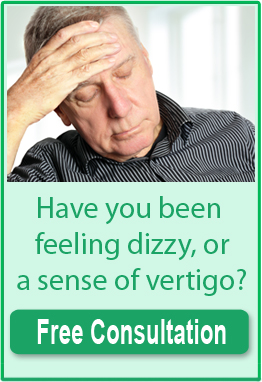